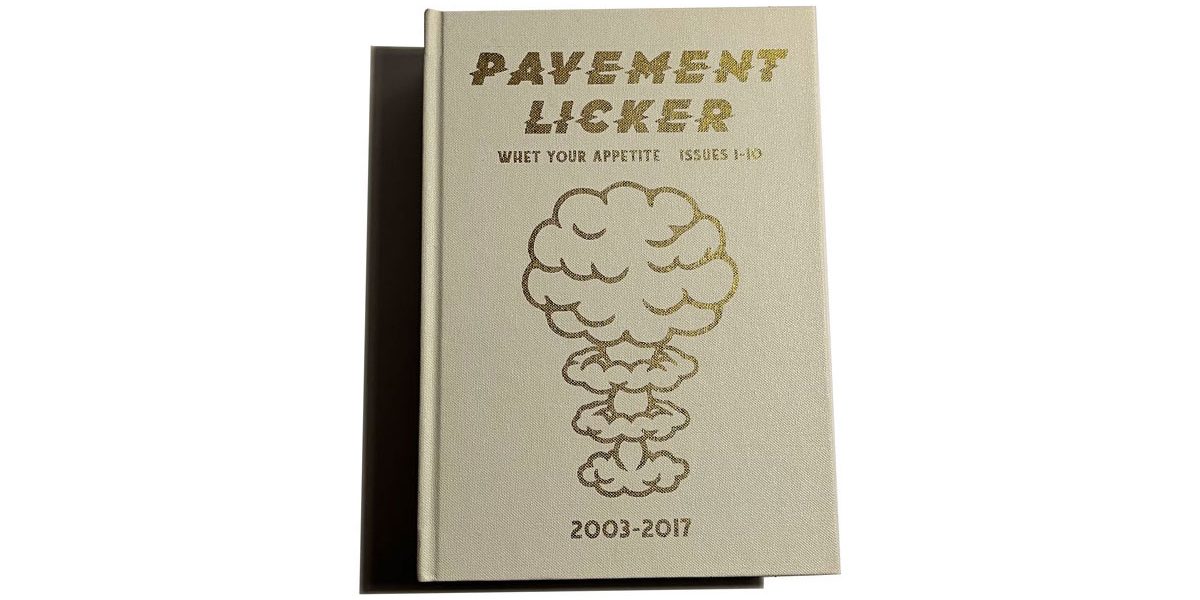 Back in 2003 graphic artist James-Lee Duffy and I founded an art zine called Pavement Licker. And in 2017, to celebrate 14 years of it we released a mammoth 518-page hardback compendium of all its issues. Featuring work by renowned and unknown artists and writers alike, the zine began as a way to support creatives in publishing work “without pushing a particular agenda or manifesto”. Over the years it has received contributions from David Shrigley, Banksy, Aries Moross, Shepard Fairey, Pure Evil, Paul Insect, Ellannah Sadkin, Jamie Hewlett, Mr Bingo, Andrew Rae, Chrysa Koukoura, Kelsey Brookes and Jon Burgerman. It’s a unique snapshot of underground art since the beginning of the century and features quotes from our contributors too. It was featured on It’s Nice That, Juxtapoz, Arrested Motion and more. We sold out of the first run and then sold out the second run. We might do another one some time. Here are some nice quotes that feature in the book

“I don’t have anything lying around that isn’t shit I’m afraid.”
Banksy

“I’ve got loads of doodles – as long as you’re prepared to take something filthy… finally, an outlet!”
Jamie Hewlett

“It’s like Heat magazine, but it’s black and white
and the pictures and the words are better.”
Mr. Bingo

“Some questions ARE black and white. Pavement Licker and I see eye to eye on the answers to the questions of whether to be conformist or irreverent, passive or creative, elitist, or accessible. Pavement Licker demonstrates that one color can answer some very important questions!”
Shepard Fairey

Who needs glossy toss rags when you can have a photocopied zine spewed from the mind of the straightest nutter I’ve ever met. Pavement Licker is, was, and always will be, king of the zines.
Steve Lazarides

Pavement Licker is a document of art foolery and stuff for generations to learn from.
Paul Insect